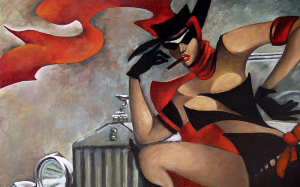 Why is it useful to acquire art objects with a certificate of authenticity?When buying works of art objects, including those created by artists representing modern art, it is important for the buyer to get a guarantee that the work he bought is…

From November 8 to 11, the international art project Genesis took place in the Palazzo Velli Gallery in Rome. It was organized by Cultural Trend, a Ukrainian magazine about the values ​​of cultural life and the River of Trees Association, the founder of the creative space in Rome, Curva Pura.

11 artists from Ukraine, Italy, Lithuania, Israel presented their works made in different genres, styles, techniques, but united by one theme – Genesis.

“We wanted to show the way to Genesis through the internal transformation through art,” says Victoria Stepanets, art project curator, editor of the Cultural Trend magazine.

“I and my partners from the Association of River of Trees were very happy to help implement such a large-scale and impact project. I think it is very important to create cultural ties between countries and with the “Genesis” project, we clearly demonstrated the potential of international cultural cooperation, ”commented Yulia Galicheva, a Ukrainian living in Rome, project manager at the Association of River of Trees.

The next day, the art project was separately presented to the staff of the Embassy of Ukraine in Rome.

“I really liked both the concept of the exhibition and the works presented,” says Alla Volskaya, a representative of the Ukrainian Embassy in Rome. “Rome lacks such projects that would represent contemporary art, impressive with both meaning and form.”

According to the concept of the project, the exhibition was divided into four zones, each of which symbolized a separate step on the way to the main one – internal awareness, rebirth, rethinking.

In the first zone, paintings by artist Irena Pavlishin, made in the style of interior painting with a predominance of geometric forms, as well as the digital art of the Israeli artist Uri de Beer were presented. This zone symbolized the first stage, at which it seems to us that we understand much more than we actually do. Here we all perceive more visually than through senses.

In the second zone “Transformation” there were presented pictures, raising more difficult questions, causing polar sensations, forcing us to think about what we might have wanted to run away from.

The themes of reincarnation and evolution in their paintings are raised by Ukrainian artist Taras Yukhimuk, about destruction as an opportunity to see new meanings speak ceramic plates painted by Ukrainian artist Mariko Gelman, about the possibility of everyone to make a step towards positive changes in the world right now – in the paintings of Israeli artist Michal Ashkenasi, about the borders that we set ourselves, and Ikara in each of us with us speaks through his paintings to the Ukrainian artist Alexey Gnevyshev. At the same time, the work of the Lithuanian artist Jurgita Ranceviene with the signature “Sometimes even serious things need irony and mockery” starts and ends the exposition of the “Transformation” zone.

Going down the stairs, the guests entered the atmosphere of relaxation, meditation, the “Inspiration” zone. Antarctica and landscapes greeted the guests with paintings by the Ukrainian artist Konstantin Pletenetsky, and the interdepartmental portrayed the Ukrainian artist Andrei Gladky.
It was possible to visualize your dreams under a pleasant music, inspired by the Pillars of the desires of Ukrainian artist Lana Kaufman.

Accepting new challenges in life, we often face difficulties and obstacles, for overcoming of which we often need a switch, a source of inspiration, minutes to hear and “renew” ourselves. And then we get that invaluable experience that allows you to see much more, deeper. This idea was laid in the last work of the exhibition, which is located in a separate area. At first glance it seems that in front of us there are only white canvases – sometimes this is what life looks like without understanding, experience, and wisdom. 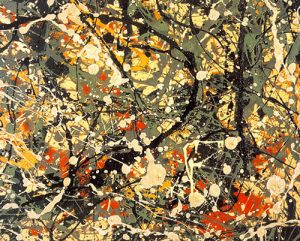