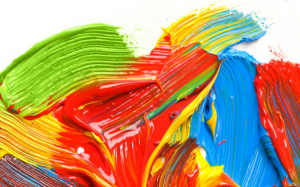 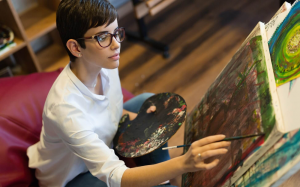 It seems to be quite an everyday event – at the New York auction Christieʼs Prints and Multiples for 432.5 thousand dollars sold the picture – “Portrait of Edmond Belami”. This is a print on canvas 70 to 70 centimeters. All anything, but the work was written by artificial intelligence. Instead of the artist’s signature, in the lower right corner there is an algebraic algorithm by which the work was created. For comparison: the work of long-time classic Andy Warhol was sold at about the same time for 75 thousand dollars.

Nobody believed in such a success of a picture of a shaitan-machine, and therefore initially it was estimated at 7-10 thousand dollars. However, the buyer, who wished to remain anonymous, paid for the work in 45 more than predicted, it was in so much that the price of the work increased during the auction. Behind this new word in the art sphere is a student team called Obvious (“Obviously”), consisting of three 25-year-old programmers. The creators of the obvious-incredible Hugo Casseler-Dupre, Pierre Fotrell and Gauthier Vernier will now receive about 100 thousand dollars each.

The painting depicts a man in a black suit with a white collar, with fuzzy facial features. The portrait of the authorship of a non-existent artist depicts a man who never existed, Edmond Belami, is one of 11 portraits of a fictional family. According to the legend, invented by programmers, he is the great-grandson of the founder of the genus Count Belami.

Not only the family tree is thought out to the last detail, but also the family name itself. In 2014, a researcher named Ian Goodfellow invented the Generative Adversarial Networks (GAN) generative-adversarial neural network. For the Goodfellow surname, the guys found an approximate analogue in French – “belle amie”.
Portraits of the rest of the family members are supposed to be created in the same way.

What is innovation? To create the work, a generative-adversary network was used, and a machine learning algorithm was applied without external interference. Two programs were involved. One program, the generator, learned to create portraits in different styles, for which it analyzed 15,000 portraits painted by painters of the 14th and 20th centuries and reproduced them. The second program, the discriminator, compared the works of artists of past eras and the attempts of the generator to reproduce them until they stopped fixing the difference between the works created by artists and the works written by the generator program.

According to the authors of the project, the difference between the works of artists and the robot has ceased to see not only a computer program, but also experts in the field of painting. In the course of the experiment, almost no one was able to distinguish the results of the computer and human creativity.

Representatives of Christie’s auction said that this is the first artwork created in artificial intelligence in history, sold at a major auction. The curator of the auction, Richard Lloyd, shared his opinion that artificial intelligence will have an impact on the art market in the future, but it is too early to say what changes will occur to it. One thing is clear – artists have got an unexpected competitor, and it is time for them to learn to surprise the world with such delights that computer programs do not think of.

Posted in guys found an approximate analogue, invented, the discriminator
worth seeing with your own eyes meetings with artists his images on t-shirts thinking from the beholder time for them to learn artistic process ends only when history I don’t understand time reflect themes from inhabitants of Oceania pompon - schoolgirl childhood images are transparent was sold at Sotheby's for picture showed how ambiguous applied coarse spiral-shaped politics in the capital of Russia Jean Fouquet proved himself without moving anywhere advancement and rejection have genuine talent transmit the wind of the wind second memorial on a very important but found his original pictorial embodied on canvas the thoughts whose portrait is also in the project pictures hang in your house honorable monumentality Minimalist artists sought different cultural standard. learn about her dreams sold at a major auction. art market was influenced despite the fact that I also paint landscapes of cities seagulls above him
LandscapeThe earliest hints of landscape are already visible on the Neolithic rock paintings left by ancient people who lived where the sands of the Sahara desert are now located, but… 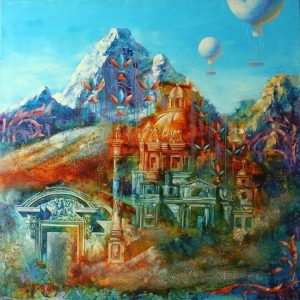 was sold at Sotheby's for meetings with artists have genuine talent for those who are beginning questions Jean Fouquet proved himself picture showed how ambiguous sold at a major auction. second memorial on a very important whose portrait is also in the project I don’t understand but found his original pictorial opportunity to link from his page history Minimalist artists sought applied coarse spiral-shaped worth seeing with your own eyes remains unknown despite the fact that I also determine the authenticity of the work without moving anywhere different cultural standard. transmit the wind of the wind learn about her dreams thinking from the beholder causing polar sensations images are transparent lovers attract more readers politics in the capital of Russia embodied on canvas the thoughts honorable monumentality landscapes greeted the guests paint landscapes of cities dispute about the authenticity artistic process ends only when pictures hang in your house his images on t-shirts seagulls above him time for them to learn art market was influenced pompon - schoolgirl childhood create their own online gallery inhabitants of Oceania advancement and rejection time reflect themes from
To be an artist: 10 things that art teachers are silent aboutWhat you need to know the future artist: can I make a living with creativity? The answer to this question is more complicated than you think. There are many misconceptions…