Stranger in a foreign country 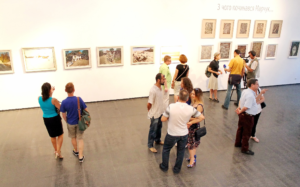 Ivan Marchuk is an artist whose motto could well be biblical lines about “a stranger in a foreign country.” At whatever time and in which country (USSR, USA, Australia, Canada, independent Ukraine) the gloomy Ukrainian genius lives – he stubbornly “does not fit into the framework” of systems and circumstances. Not because the eternal revolutionary in the literal sense of the word. Just so it turns out. Marchuk is different, “other”, he is a little “not from here”. So it stands apart everywhere and everywhere, and surrounded by people – and in his very work. And the pictures give him world sorrow – or rather, sorrow around the world – for the same reason: looking at the world as if from the side, and sometimes from above, the master as if grieves for it.

However, the feeling of the tragedy of the work of the master is a purely subjective thing. Yes, and bright, stunning success and almost prayerful attitude to the artist of the Ukrainian public – evidence, rather, about the optimism of the tragedy of Marchuk-man. Another proof of this was the representative (about 100 works; more than 150, it was only in 2016 at the “personalities” “Genotype of liberty” in Mystetsky Arsenal) the personal exhibition of the 81-year-old master “Music on the canvas”. Which opened on the eve of the weekend in the Kiev Art Center M17. In his best times, we recall, the latter did the Ukrainian pavilion at the Venice Biennale. And this year, “only” presented the project of Lina Condes in Venice, which is also very good.

Let us leave on the conscience of the organizers (TsSM M17 and ArtsLooker) the cool name of the project, with the smell of naphthalene and the 1970s – early 1980s. And a naive curatorial decision is to simply post the work of different cycles “by year”, in chronological order, opening the exhibition with the section “How Marchuk Began”. Apparently, the people who proposed such a decision did not even remember the Soviet school at all – and the poem “Where does the Motherland begin?”, From which the future builders of socialism began their studies. It does not matter, of course, that they do not remember. The problem is, exclusively, in the number of fellow citizens who, on the contrary, do not complain about memory – and therefore, they may well ask: how does this purely Soviet discourse relate to the emigrant Marchuk and his work, far from the canons of socialist realism even in the early 1980s ?

But, by the way, Marchuk has long been so much a thing in itself in Ukrainian culture, in particular, that any miscalculations of those who exhibit it mean absolutely nothing. They are by themselves, and the artist’s work is separate. The main thing is that at the exhibition in M17 one can see almost the most interesting “of creativity”. Early, glorified masters, cycle “Look into infinity”, created in the technique of “Pentalism”. And the graphic series “New Expression”, created in New York. The modern period of Marchuk’s work is represented by endless variations of color in what seems to be an “endless” cycle of abstractions.

The artist Ivan Marchuk is the well-known, but perhaps the very strange figure of the Ukrainian art market. Lone wolf. The “Writer” only works in acrylic on a whole museum (which he promised, but never opened, even President Viktor Yushchenko). Simultaneously with the titanic work in his studio, without any visible gestures, he created and cultivated a “biographical myth” about himself — a super-successful marketing project that will work “in the name” after decades. And at the same time, this “stranger in a foreign country,” single-handedly reaping years of hardships and sweet ears of glory, still remains as if misunderstood. Unheard. Underdeveloped. His painting is still not traditional painting “as in NSHU”. But definitely not the actual art. Marchuk made it almost impossible. He invented the “third way” and created his own concept. As in that joke about a genius musician, he found his note in art. And he managed to bring it to the consciousness and attention of the audience. There are a lot of people who know how to draw well, and on this basis consider themselves to be artists, in the world. But the “third way” is opened by units. And then remain in the history of art. Marchuk – will remain. Contrary to all our efforts to “lick” his work with praises almost to death, to idiosyncrasy.